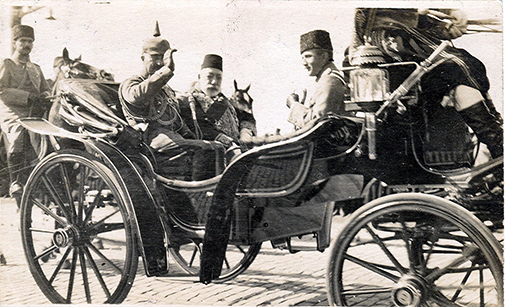 Elite with a Mission: Elite Formations and the Ottoman Public Sphere 1876–1918, falls within the project’s chronological unit Empire and Nation States in Post-Ottoman Times 1870–1950. The framework is the Late Ottoman period, 1876–1918, especially 1908–1918, when a number of dramatic changes took place in Ottoman society, with revolution, modernization and war as the key words.

A crucial change in this period was the emergence of a new imperial elite that arose as a result of the sweeping modernization processes of the nineteenth century. This development had opened the way for new rights, relations and possibilities for the different population groups of the Ottoman Empire. The new elite reflected the ethnic diversity of the empire and its multiconfessional composition and assembled around a project, known as Ottomanism, for a shared future to preserve the empire as a multiethnic and multiconfessional unit. A possibility to realize this vision offered itself in the period 1908–1912, in the wake of the revolution of the Young Turks. A constitution was introduced, a parliament opened, and conditions were created for a free press.

The political process was characterized by broad public participation over the whole ethnic and religious spectrum, by pluralism of opinion with a parliament and press as the political and intellectual platform. The viability of the reforms, however, was highly dependent on relations between the state and the non-Turkish and non-Muslim population groups. It was in this context that the role of the new elite as an intermediary was vital. A characteristic of a modern society is greatly increased social mobility and new career paths based on meritocracy and an expanding educational system. It is in the light of this that the entrance of new actors in the public sphere will be analysed. The same applies to their growing importance in the political arena.

The study will focus especially on the background of the new elite and its interaction with the public sphere. The importance of the emerging press and the parliamentary elections is examined in relation to the tension between the efforts of the Young Turk regime to Turkify the economy and create a Muslim middle class on the one hand, and the shared Ottoman ideals on the other.

The study will use the following main sources: (1) parliamentary minutes from the Young Turk period; (2) the Ottoman press, especially some of Istanbul’s influential national newspapers, and selected Ottoman publications from London, Paris and Thessaloniki in the periods 1876–1878 and 1908–1914; (3) British embassy and consular reports from the Ottoman Empire. Other sources to study will be memoirs and travel narratives by contemporary foreign observers, and Ottoman historical works.

The aim of the study is to analyse how the new Ottoman elite arose, and how it made itself felt in the social, cultural, ideological and political negotiations and discussions in late Ottoman society; how and why it developed in two main directions (centralist unionists and federalist liberals) and what caused the final victory of the centralist unionists, which simultaneously put an end to the viability of Ottomanism. This was to be of great significance for what happened subsequently, especially because the new elites, who were hatched and schooled in this process, became leaders in the successor states of the Ottoman Empire in South-East Europe and Anatolia. In the post-Ottoman period the political choices and approaches of the new elite continued to be influenced by their imperial background. In this light, Simsek will also study the part played by modern initiatives such as free elections and political representation for elite formations and the perception of political legitimacy.